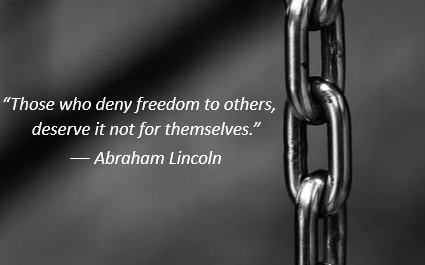 Unlike common thought, the idea of slavery is not a terrible thing. Actually, it is un-consented to, unlawful, forced slavery that is cruel and preposterous.

According to Encyclopedia Britannica, the Slavery Abolition Act of 1833 freed more than 800,000 slaves in the Caribbean and South America (as well as a small number in Canada).3

How did people go about the slave trade anyways?

Trading ships from Europe would set sail to Africa with manufactured goods. They would then fill up their ships with the young and healthy Africans to return to Europe. It was crammed for these slaves inside the ships, and many died. The ships generally would return bearing material goods – as well as surviving young bodies to sell into slavery.2

After one was sold, it was not necessarily known what one was going to do. For instance, some slaves were sold to work the plantations. Others may have been bought by kinder, higher class citizens. It was not a closed case as to whether one would get a good master or a bad/evil one. Even if one’s first, original master was a good one, he may die and then one may be inherited by an evil master.

Some of you may have read stories; and from those stories deduced that for some, slavery was not that bad. That would be a correct deduction. However, just because you are enslaved to a good, kind, loving master does not change the fact that you are enslaved! Besides this, there were those who were not enslaved to a good master and these slaves could have it extremely bad. Slaves could be separated (and often were) from their family members. Sometimes never to see them again.7

Interestingly, it has not been an un-heard-of thing for slaves to love their masters. In fact, the Bible has something interesting to say concerning the length of time a slave may be held. It says that after six years of serving, the slave must have the option of going free – without paying anything (Exodus 21:12)! However, if that slave wished to stay with his master because he loves him, he was to have his ear pierced through with an awl; then, the slave will serve the master for life (Exodus 21:5-6).

When someone says, “slave” you may think of someone who is employed in back-breaking, manual work. However, that was not the only type of slavery. Even back then there was sex slavery. Terrible as it was, people would force their slaves to have intercourse with other slaves – or even themselves. Even more terrible, if a master had a child with his slave, the child would also be his slave…and could be treated as one.5

Other “occupations” for slaves could have been to work on large plantations as field hands and/or house slaves.6 Though, as Vox points out, house slaves had it not better than field slaves. In fact, some might argue that it was even more damaging to the house slaves than to the field slaves since in that case, one’s father would be the master that beat and sold the slave.9

Things were not all easy for the slave holders. There was some resistance and many slaves ran away. Sometimes, there was rebellions. One particular rebellion that was the most terrifying to slave holders was led by Nat Turner. This rebellion was used as “proof” that people of black complexion were inferior and, as much as possible, their education needed to be limited.8 With the help of the Underground Railroad, many slaves were helped North to states in which slavery was abolished, or like Canada, strongly opposed to and resisted against.

How did the Underground Railroad operate?

The Underground Railroad was operated by “conductors” who would “conduct” their “passengers” further along the “railroad.” Conductors could be either freed slaves (which was rather un-common) or white abolitionists who felt strongly about making a change in the slave realm. One such conductor was Mrs. Harriet Tubman. Tubman was an escaped female slave who freed at least 70 people and, “Never lost one passenger.”  She was one of the most well-known conductors and went on to become a Union spy.

Unfortunately, for the cases where slaves were only moved further north in the United States, there was a law passed in the U.S. which made it so that slave owners could enter other states and “retrieve” their slaves. There was nothing left to do but to go into hiding or advance along the railroad further north – to Canada.

But how did slavery come about in the first place?

Unfortunately, slavery wasn’t just something that came up once in history never to show up again; no, slavery has existed since the early civilizations. However, this is what History has to say about the start of the African slave trade,

“Hundreds of thousands of Africans, both free and enslaved, aided the establishment and survival of colonies in the Americas and the New World. However, many consider a significant starting point to slavery in America to be 1619, when the privateer The White Lion brought 20 African slaves ashore in the British colony of Jamestown, Virginia. The crew had seized the Africans from the Portuguese slave ship Sao Jao Bautista.”8

Not to mention the fact that by 1793 Eli Whitney had invented the cotton gin (which was incredibly more efficient than past methods) thereby changing the main U.S. market to be that of cotton (whereas before it had been tobacco) which added to the increase in demands of slave labour.8

“In the Caribbean, Dutch Guiana, and Brazil, the slave death rate was so high and the birth rate so low that they could not sustain their population without importations from Africa. Rates of natural decrease ran as high as 5 percent a year. While the death rate of US slaves was about the same as that of Jamaican slaves, the fertility rate was more than 80 percent higher in the United States.”4

We can see from the above quote that just from death (and the lack of birth) alone they were needing to enslave more humans just to “sustain their population.”

Some slave owners owned hundreds of slaves. Those that could afford these many slaves did not always take them time to care for each one’s individual needs – in fact, even considering the fact that they were still slaves is almost an answer in itself that these slave owners did not care.

Considering the verse in the Bible previously mentioned, and considering the fact that the Bible does not say that you aren’t to have slaves, many might be led to the ideology that the Bible is wrong because they believe that God could never have condoned slavery. They may say, “Even though the masters would let the slave free in the seventh year, the master might have hurt the slave; just like the diseases and wounds which Stephan Mintz mentions above!” Actually, the Bible says that if you hurt the slave by damaging the eye, or even just knocking out a tooth of one’s male or female servant, the master was to let the slave go free on account of the slave’s eye or tooth (Exodus 21:26-27).

One may say, “Well, how about Exodus 21:7 which says, ““If a man sells his daughter as a female slave, she is not to go free as the male slaves do.” Clearly the Bible is sexist.” Actually, no. The man that bought the girl was to take her as one who was under his authority and she was to be treated like a wife or daughter. So actually, she was to be treated just as good as the male slave.

Slavery was part of the culture, not just racist

Though many don’t realize, slavery was part of the culture, not just a defiant racist movement. In fact, there were several black slave owners, ironic as that seems to us. If a black person were free, that person was permitted to act, to an extent, like a white slave holder; but was not given the full privileges that white people were given.9

The abolition of the slave trade

The American Civil War is almost universally accredited with the abolition of the slave trade. Very early in the start of the Civil war (also known as The War Between the States),10 eleven states had seceded to form the Confederate States of America. Battlefields says this,

“The Civil War was fought in thousands of different places, from southern Pennsylvania to Texas; from New Mexico to the Florida coast.”

The Union was stronger (as far as man-power is concerned, it was 5 to 1 at the start of the war), had the advantage of the U.S. army, and had more resources.11 Gradually, the Confederate army weakened. Led by Abraham Lincoln, the Union (which consisted of the 20 northern states and the 5 border states that supported it)11 fought against and defeated the Confederate army (after four years of fighting and 10,000 battles) in April of 1865.12 The Union, often referred to as the Abolitionists by the Confederates, had won.11

“On September 22, 1862, Lincoln issued a preliminary emancipation proclamation, and on January 1, 1863, he made it official that “slaves within any State, or designated part of a State…in rebellion,…shall be then, thenceforward, and forever free.”…Slavery itself was never widespread in the North, though many of the region’s businessmen grew rich on the slave trade and investments in southern plantations. Between 1774 and 1804, all of the northern states abolished slavery, but the so-called “peculiar institution” of slavery remained absolutely vital to the South. Though the U.S. Congress outlawed the African slave trade in 1808, the domestic trade flourished, and the enslaved population in the U.S. nearly tripled over the next 50 years. By 1860 it had reached nearly 4 million, with more than half living in the cotton-producing states of the South.”

Though African slavery ended, there were still scars. Mental scars, physical scars, and emotional scars. There are even scars to this day; taking form as scars on a person’s feeling of self-importance or scars in the pride of one’s heritage; ancestry; and, in general, past. But the past is behind us. It always is. It should be learned from.

2 thoughts on “Research Paper On the Slave Trade”